So back in ’85 I became a fire explorer with Post 546 in the Chili FD. When I turned 18 I became a firefighter. Things at the department were much different back then. And although it may be disputed, my opinion says that it was a lot more fun. training regulations were not as stringent, guys hung out there almost every night of the week, and the work got done. The firehouse was spotless and I really enjoyed the formative years as an EMT and firefighter. I loved it. I loved seeing the pictures of past picnics and parades. There were still plectrons and Pageboy pagers. The dispatchers would call you at home to take an ambulance job.

“Moose” was the station Captain. he and I didn’t quite see eye to eye. he was gruff. Abrasive. Difficult for me to understand. A little later in life he went exempt. He had gotten a piece of slag from welding inside his lower leg that became infected and he lost his lower leg. He was forced to retire and decided to come back to the FD. I am not sure what happened during his time away. I learned a lot more about the fire service and he changed as person. We got along pretty good. He was a mechanic, and I was too. A few years ago we would meet at the FD on Sunday night to watch the show American Loggers. We enjoyed the antics of these guys and discussed the footage that had to have been cut from the show. Good times indeed. He is still a little rough on the outside, but has a heart of gold. He’s not always politically correct when he says stuff, but it was kinda funny sometimes and sometimes I was mortified. There is a lot I know about the man who got his nickname when he hit a moose with his car. No, he’s not the greatest man to ever walk the earth, but we sure did have good time.

During the last few years we greeted each other with a hearty F— You! Some of the newer guys that didn’t know us thought we were going to throw down and have knuckle dragging brawl. We enjoyed a cup of Joe with our friend Scott at Tim Hortons and talked about anything and everything.

I haven’t seen Moose in a few months. He doesn’t answer his phone and doesn’t have email. I don’t see his truck around either, but his wife says he’s OK. At any rate, I did enjoy his tales from the life he lived, even if some of them might have been tall tales, they were still enjoyable to listen to. I hope my friend is doing OK. 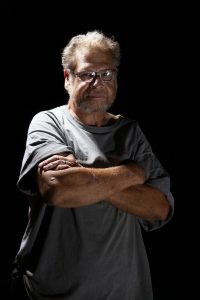 I snapped this picture when I was playing around with some portable lighting and he agreed to be my stunt man and hold his normal pose for me. This is how I know Moose. And I rather like the guy.