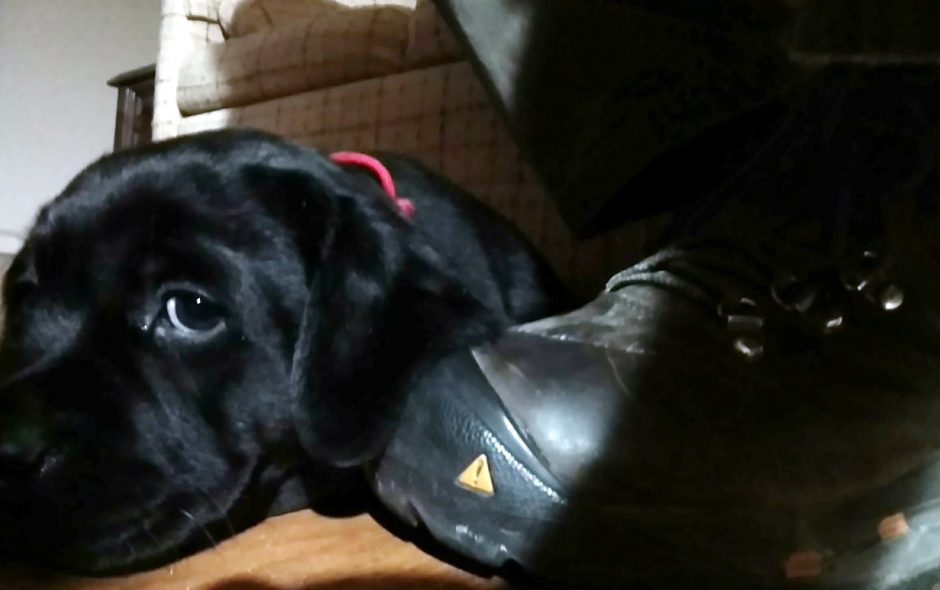 A friend and colleague has been breeding Labrador Retrievers for a number of years. I finally thought that I was ready to become a dog’s entire life again. I have had three in my lifetime – two chocolates and one yellow. It’s been almost nine years since my ex and I split and she took the dog.

I had thought about the idea for years, and more lately after reading the benefits that dogs bring to a humans life. My second one was struck by a car and died instantly. My grief was so deep I didn’t leave the house for a week.  He was my faithful companion and went nearly every where with me.

So I guess I got puppy fever the last few months and Alana had a litter of black labs that were just ready to go. I prefer the male sex, but all she had left was a female. I went to visit the pups the other day, and although there are “scientific” tests to see what kind of personality they may have, I have my own little quizzes. I stayed at their house for over an hour. The fate of having this little girl become a part of my life rested with my dad.

I live with my dad – I see it as mutually beneficial. I help him with things around the house and keep an eye on his health, and I get to stay in the house I grew up in which I love. It even has a creek behind it that I taught two of my labs to swim in.

Labs are so intelligent, and so good with people. I was going to train this one to retrieve waterfowl and also get her to be certified as a therapy dog for veterans. I asked Alana if I could just borrow the pup for a night or two to see how it went with dad. She was more gracious than ever even setting me up with the right food and a crate. I have used a time honored book to schedule and train the labs, “Water Dog” by Richard Wolters. It’s worked so well for me. Given me insight into a puppy’s mind.

The drive home was difficult as I expected. She was timid, howling and moaning a bit as she watched the street lights flash by and the g forces of the turns. She crawled up on my shoulder, and sat quietly on my lap. She was doing much better than I expected.  I arrived home and greeted dad who was watching a game in the chair.

it’s always been his house and his rules, but I know deep down he loves dogs. There have been many times this has been revealed to me. He has a kind heart inside. I was hoping he would OK my little pal.

The truth was he didn’t. I tried explaining that she comes from great parents and grandparents. She would be good for the both of us. She would have been the perfect fit. Love would have been so overwhelming in that house again. But dad wasn’t having any of it. It was a no-go. I am an adult of course, but in the end, I must respect his wishes under his roof.

I called Alana and she was still up. I left the little one one the floor to use the bathroom, and when I returned she was patiently waiting for me in the same place.

I started the drive back. I was sad, and maybe the puppy knew it. She didn’t make a noise. She sat on my lap and when I stopped petting her, she moved my hand back with her paw. She climbed on my chest and gave me some kisses.

I had made a very difficult decision for myself and made a commitment to that little black ball of fur. now it was over. How can a guy get so attached to a 7 week old pup in a couple of hours. I’ve thought about for two days now. She had a great disposition and temperament. But what I really think they key was…. I was ready to move part of my life forward. And this little girl was the life I needed. I was ready to love that little dog, and I know she was ready to give it right back.

I learned a powerful lesson in the last two days. These type of lessons cannot be learned any other way. Sadness will leak from my heart for a few days I would guess. I know the pup will get a good home. I know I will move on. I respected my dad’s wishes. I know I can love again, even if it just a puppy.